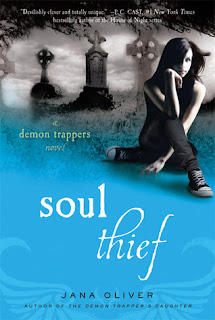 
Seventeen-year-old Riley has about had it up to here. After the devastating battle at the Tabernacle, trappers are dead and injured, her boyfriend Simon is gravely injured, and now her beloved late father’s been illegally poached from his grave by a very powerful necromancer. As if that’s not enough, there's Ori, one sizzling hot freelance demon hunter who’s made himself Riley’s unofficial body guard, and Beck, a super over-protective “friend” who acts more like a grouchy granddad. With all the hassles, Riley’s almost ready to leave Atlanta altogether.
But as Atlanta’s demon count increases, the Vatican finally sends its own Demon Hunters to take care of the city’s “little” problem, and pandemonium breaks loose. Only Riley knows that she might be the center of Hell’s attention: an extremely powerful Grade 5 demon is stalking her, and her luck can't last forever…

I seem to have been catching up on my reading lately and finally getting around to sequels that came out last year.  Soul Thief is no exception and I'm so glad I went back to the Demon Trappers series for this amazing follow-up.  Soul Thief picks up immediately after The Demon Trapper's Daughter, about 1 hr after in fact, and Riley is trying to process everything that has happened.  It was very easy to pick up the story and remember what had happened previously, thank goodness.

All the old characters are there - Riley, Simon, Beck, Pete, Ori and there are a host of other characters, some old, some new, that help move the story along.  Most stories these days have a love triangle going on, right?  Soul Thief goes one better with a love quadrangle, or maybe even a love pentangle if Peter gets into the game, but be warned, there are some major surprises coming your way.  I'm still gob-smacked by a couple of them myself, coming so far out of left field I missed the hints completely.

Soul Thief won't make a huge amount of sense if you haven't read DTD, too much went on in the first one that is still relevant.  However, stellar character development, exciting storylines and a deep sense of urgency make Soul Thief a fantastic read.  Enjoy.
Posted by curlypow at Tuesday, July 31, 2012