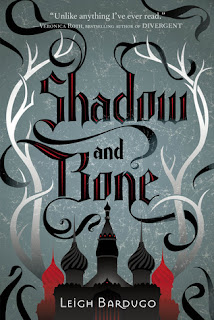 
Alina Starkov doesn’t expect much from life. Orphaned by the Border Wars, the one thing she could rely on was her best friend and fellow refugee, Mal. And lately not even that seems certain. Drafted into the army of their war-torn homeland, they’re sent on a dangerous mission into the Fold, a swath of unnatural darkness crawling with monsters who feast on human flesh.

When their convoy is attacked, all seems lost until Alina reveals a dormant power that not even she knew existed. Ripped from everything she knows, she is whisked away to the royal court to be trained as a member of the Grisha, the magical elite led by the mysterious Darkling. He believes she is the answer the people have been waiting for: the one person with the power to destroy the Fold.

Swept up in a world of luxury and illusion, envied as the Darkling’s favorite, Alina struggles to fit into her new life without Mal by her side. But as the threat to the kingdom mounts, Alina uncovers a secret that sets her on a collision course with the most powerful forces in the kingdom. Now only her past can save her . . . and only she can save the future.

Special K - Ah-may-zing. After a run of books that while I didn’t hate them...I didn’t love them either. They were just kind of blah and it was starting to make reading feel like a chore. Along came Shadow and Bone which knocked my socks off and reminded me just why I continue to slog through books, even when sometimes it feels a little more tedious than it should. And that reason is to find gems like this. Curlypow - OMG you are so right about this.   I loved every minute of it.  It was just so easy to fall into this world

Veronica Roth is quoted as saying this book is “...like nothing she’s ever read”, and I fully agree. I love that it’s set in a world that I recognize slightly as hovering somewhere around Russia, but is so thoroughly changed that it could easily have been completely fabricated (and this is something I hope to learn more about in future books!). Bring them on please! I love the characters, who are charming and delicious in their endeavours, whether they attack them with caution, abandon or tenacity.  They all seemed to blossom in my mind and become like people I knew.  There was so much depth to them all.

Alina  is our protagonist, and she is strong and believable as our heroine (with one lapse that irks me a little involving the Darkling, but it’s small enough I can let it go). She is smart, but doubts herself in almost every way and is desperate to fit into almost anywhere that will accept her. Mal is even more perfect in his flawed way – the playboy that resists love. I think I appreciate him most because it reflects quite a few guys I know – ignoring that special girl that everyone can see is right for him in favour of other prettier, sparklier things. And the Darkling is magnificent as...well, just the Darkling. I won’t spoil what or who he is for future readers!  I don't know if it was just the name Mal or if the character really did remind me of him, but I kept picturing a younger Nathan Fillion - a la Firefly - when Mal was mentioned.  His attitude and outlook reminded me so much of the character on the show . And you are so right about the Darkling, he really was magnificent. This was a definite case of 'less is more' with this character.


The Grisha are power-wielders – part-science and part magic, their reign and grasp on the world is coming to an end – which again simply weaves a wonderful tale of intrigue and choosing sides. I liked that the author does not try to 'explain' the magic.  It is inside you, and you either have it - or you don't.  But she acknowledges that sometimes magic is not enough and the Grisha have to learn how to fight the old fashioned way - bumps and bruises included. I also love the aptness of the title without it being literate (re: pulled from a sentence in the book). I think I missed that bit! I love that the styling of this book makes me think of old world Prague.  Have I mentioned that I love this book? Yes you have already, but you are forgiven, because I agree with you :)
Those of you who are constantly on the prowl for the next big thing in YA – The Hunger Games, Divergent, The Selection – I would get your paws on Shadow and Bone ASAP, it’s the series I think everyone should keep an eye on. I also really recommend it to those who loved Daughter of Smoke and Bone – the feeling is the same, those hints of magic and fantasy are there and the characters are just as fabulous.  Maybe a little bit of The Gathering Storm in there as well, but only a little bit, with the flavouring of old Russia.  I can definitely see this on the big screen - can you just imagine what CGI would do with the Fold and the Volcra - major creepiness I'm sure.

Many thanks to Special K for this review. Hope you don't mind I added in my 2 cents worth.I  wasn't going to bother reading Shadow and Bone, but after reading her review I just had to, and I'm so glad I did.  Do yourself a favour and find this one. You will not be disappointed.

And don't forget to enter our GIVEAWAY for Pushing the Limits
Posted by curlypow at Sunday, September 02, 2012