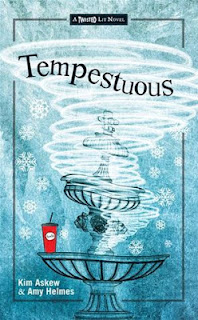 Recently banished, unfairly, by the school’s popular crowd, former “it girl,” Miranda Prospero, finds herself in a brave new world: holding dominion amongst a rag-tag crew of geeks and misfits where she works at the Hot-Dog Kabob in the food court of her local mall. When the worst winter storm of the season causes mall workers and last-minute shoppers to be snowed-in for the night, Miranda seizes the opportunity to get revenge against the catty clique behind her social exile. With help from her delightfully dweeby coworker, Ariel, and a sullen loner named Caleb who works at the mall’s nearby gaming and magic shop, Miranda uses charm and trickery to set things to right during this spirited take on Shakespeare’s The Tempest.


Buckle on your seatbelts and get ready for a wild ride.  This fascinating and hilarious new take on Shakespeare's 'The Tempest' was so much fun to read.  It's a long time since I was forced at chalk point to read The Tempest and I had forgotten much of it in my desire to repress less than stellar school memories. However after finishing 'Tempestuous', I'm about ready to pull out my pocket Shakespeare and refresh my memory.

Askew and Helmes have taken all the major plot points from the original and have set them in a contemporary mall, where a bunch of disparate teenagers have been forced to spend the night because of a huge snow storm.  Miranda is absolutely wonderful.  Her character imperfections and her road to 'recovery' are handled beautifully and with some tongue in cheek humour.  I could just picture her in my mind in her hotdog hat and bright red tights - you have to read about it to understand.

Secondary characters Caleb, Ariel, Chad, Grady, Rachel, the 'Itneys' and a host of others are perfect stereotypes and charicatures, but are at the same time real and believable and I recognised many of my old friends in these characters.  The action comes in the form of stealth glitter bombs (no I'm not kidding), rock concerts and mischief and mayhem in the food court, while trying to find the mysterious bad guy.  It all pulls together into this marvellous romantic comedy that is totally implausible and unlikely, yet completely fun.  By the end of it, you'll all be wishing that you too were snowed in at the mall.

I will have no hesitation in recommending 'Tempestuous' at work.   It was a funny, quick read that I thoroughly enjoyed.

PS Keep your eyes open for our Shout Out to Indies post in late January when we'll be meeting the authors.
Posted by curlypow at Saturday, December 22, 2012