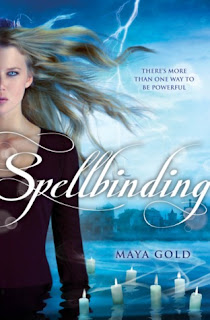 
It is during a routine school project that Abby Silva--sixteen and nearly friendless--makes a startling discovery: She is descended from women who were accused of witchcraft back in 1600s Salem. And when Abby visits nearby Salem, strange, inexplicable events start to unfold. Objects move when she wills them to. Candles burst into sudden flame. And an ancient spellbook somehow winds up in her possession.

Trying to harness her newfound power, Abby concocts a love potion to win over her longtime crush--and exact revenge upon his cruel, bullying girlfriend. But old magic is not to be trifled with. Soon, Abby is thrust headlong into a world of hexes, secrets, and danger. And then there's Rem Anders, the beautiful, mysterious Salem boy who seems to know more about Abby than he first lets on.

A reckoning is coming, and Abby will have to make sense of her history--and her heart--before she can face the powerful truth.

Spellbinding was a quick fun read that didn't really have any surprises for me.  High school nobody who for one reason or another comes into her previously unknown 'powers' - in this case witchcraft.  She goes from being a invisible nobody to an intriguing somebody, with boys suddenly showing an interest in her like never before.

Throw in an unknown evil force, or bad guy, discover that with great power comes great responsibility (sorry, don't remember which hero was originally told that) and when push comes to shove, make the right decision and regret your bad ones.  Oh, and chose one of the two good looking, hot boys,  'cos let's face it, one is enough for anyone, right!

Ok, sorry if that made it Spellbinding sound bad, it really wasn't.  I had fun reading it, but there was nothing in it that really made it stand out from any of the other high school based, new powers arriving titles, that are out there. I will recommend it for a quick summer read that is suitable for younger teens though.
Posted by curlypow at Thursday, April 11, 2013