The Farm by Emily McKay 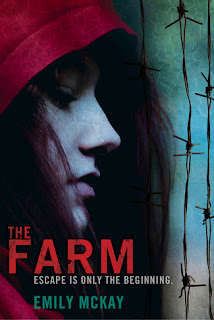 
Life was different in the Before: before vampires began devouring humans in a swarm across America; before the surviving young people were rounded up and quarantined. These days, we know what those quarantines are—holding pens where human blood is turned into more food for the undead monsters, known as Ticks. Surrounded by electrical fences, most kids try to survive the Farms by turning on each other…

And when trust is a thing of the past, escape is nearly impossible.

Lily and her twin sister Mel have a plan. Though Mel can barely communicate, her autism helps her notice things no one else notices—like the portion of electrical fence that gets turned off every night. Getting across won’t be easy, but as Lily gathers what they need to escape, a familiar face appears out of nowhere, offering to help…

Carter was a schoolmate of Lily’s in the Before. Managing to evade capture until now, he has valuable knowledge of the outside world. But like everyone on the Farm, Carter has his own agenda, and he knows that behind the Ticks is an even more dangerous threat to the human race...

The Farm was an exciting and intriguing apocalyptic vampire story with a bit of a difference.  One thing I have heard is it being compared to the Hunger Games.  I'm not sure why people do this.  Yes, I am absolutely certain that the people who enjoyed THG will enjoy The Farm, but the storylines are not alike it at all - well not enough for that kind of comparison anyway.

Government experiments have produced warped monsters, referred to as the undead although I'm not sure why, but these monsters definitely have a similarity to those in Resident Evil.  In this world we discover that vampires are real and taking advantage of the situation.  There is some incredibly complex world building going on here that makes The Farm very intense and readable.

Told from three alternating POV's  - those of Lily, Mel and Carter - this allows us to see the story from different angles and understand the reasons behind certain actions.  Carter is a rather complex guy and I liked his character and his obvious concern for Lily.  Lily has many layers, but her overwhelming reason for living is to protect her sister from anything and everything.  I did enjoy the way that she was willing to change her mind about people when her opinions were proved wrong - McKenna and Joe being the most obvious examples.  The short segments seen from Mel's POV were strange, yet enlightening and added another dimension to the story.  Another interesting character was Sebastian - a vampire who is helping the rebels.

I'm really interested to see where this story is going - there was a marvellous twist at the end that I wasn't expecting - and I'll happily read future volumes, when ever they happen to arrive.  A great title for apocalyptic fiction lovers, and yes -  for fans of the Hunger Games as well.
Posted by curlypow at Sunday, April 14, 2013