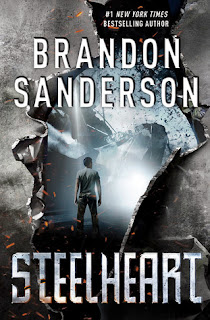 
There are no heroes.

Ten years ago, Calamity came. It was a burst in the sky that gave ordinary men and women extraordinary powers. The awed public started calling them Epics.

But Epics are no friend of man. With incredible gifts came the desire to rule. And to rule man you must crush his wills.

Nobody fights the Epics... nobody but the Reckoners. A shadowy group of ordinary humans, they spend their lives studying Epics, finding their weaknesses, and then assassinating them.

And David wants in. He wants Steelheart—the Epic who is said to be invincible. The Epic who killed David's father. For years, like the Reckoners, David's been studying, and planning—and he has something they need. Not an object, but an experience.

Brandon Sanderson is an author I have been wanting to read for quite a while now, but for some reason I've never got around to it.  So when I realised he had written a YA novel it seemed like the perfect opportunity and  Steelheart did not disappoint.

David has spent most of his life trying to work out Steelheart's flaw, or rather his weakness.  HIs sole purpose is to join with the Reckoners, a group of mysterious vigilantes, and to kill Steelheart.  His motives were believable and his actions made sense.  When he meets up with the Reckoners his transition from newbie to part of the team is fraught with danger and excitement.

The team members, Megan, Prof, Cody, Tia and Abraham, have such a great dynamic that it was a pleasure to read about them.  Of varying ages each one has a part to play and does it well, but we have to get to know them along with David. This world that they live in is so well imagined that it was possible to climb through steel tunnels along with them and to witness the illusions as they happen.

Steelheart is an exciting roller coaster ride into a new world filled with megalomaniacs and unsung heroes.  It's fun and interesting and basically un-put-downable!  Librarians, this is a great one to recommend to the boys.