The Choosing by Rachelle Dekker 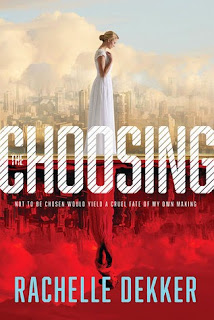 
“Not to be Chosen would yield a cruel fate of my own making.”Like all citizens since the Ruining, Carrington Hale knows the importance of this day. But she never expected the moment she’d spent a lifetime preparing for—her Choosing ceremony—would end in disaster. Ripped from her family, she’ll spend her days serving as a Lint, the lowest level of society. She knows it’s her duty to follow the true way of the Authority. But as Carrington begins this nightmare, rumors of rebellion rattle her beliefs. The whispers contradict everything she’s been told; yet they resonate deep within. Then Carrington is offered an unprecedented chance at the life she’s always dreamed of, but she can’t shake the feeling that it may be an illusion. With a killer targeting Lints and corruption threatening the highest levels of the Authority, Carrington must uncover the truth before it destroys her

'The Choosing' was an OK book for me, but to my mind it didn't really have anything in it that made it stand out from the crowd. It has a dystopian society where girls are raised to expect to be Chosen as a wife at age 17 and when the aren't - well life is no longer worth living so to speak and they become Lints - those unseen workers who actually keep society running.

I felt that Carringtons relationship with the guard was a little fortuitous for my tastes and since I can't actually remember his name, the romance obviously was not particularly memorable for me .  However I did like the story arc with Issac - now there is one nasty dude.  This was the point where I began to realize that Rachelle Dekker really is her father's daughter (Ted Dekker).

To be honest, I don't really have much to say.  The book is Christian fiction and I am not a huge fan of that genre, and honestly I probably would not have read it had I realized before hand. There was just a little too much soul searching and faith for me, but that is very much a personal opinion and not a reflection of the writing.  Will I recommend it? Probably.  I can think of several dystopian fans of my aquaintance who would enjoy it, but I doubt that I will persue any further volumes should there be any.
Posted by curlypow at Tuesday, May 26, 2015