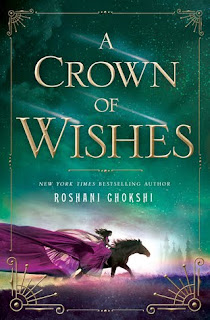 Gauri, the princess of Bharata, has been taken as a prisoner of war by her kingdom’s enemies. Faced with a future of exile and scorn, Gauri has nothing left to lose. Hope unexpectedly comes in the form of Vikram, the cunning prince of a neighboring land and her sworn enemy kingdom. Unsatisfied with becoming a mere puppet king, Vikram offers Gauri a chance to win back her kingdom in exchange for her battle prowess. Together, they’ll have to set aside their differences and team up to win the Tournament of Wishes—a competition held in a mythical city where the Lord of Wealth promises a wish to the victor.Reaching the tournament is just the beginning. Once they arrive, danger takes on new shapes: poisonous courtesans and mischievous story birds, a feast of fears and twisted fairy revels.Every which way they turn new trials will test their wit and strength. But what Gauri and Vikram will soon discover is that there’s nothing more dangerous than what they most desire.

This week I won a book!!  Griffin Teen sent me a copy of A Crown of Wishes, book #2 of the Star-Touched Queen series, a title that has been on my TBR list for ages.  THANK YOU!!  A Crown of Wishes does not come out until later this month so I guess I don't have much time to catch up, do I?