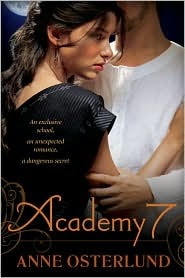 Published: May 2009
Publisher: Puffin
Pages: 259
Copy from: Library
Summary: Goodreads
Aerin Renning is a scarred fugitive, Dane Madousin a rebellious son of privilege. On the surface, they have nothing in common. But the two most competitive freshmen at Academy 7 share an undiscovered bond. Both harbor a dangerous secret that threatens their own destruction. And while their safety depends on their staying apart, the two are inexplicably drawn to each other.

Even as unknown forces conspire to separate them, their competition turns to friendship, and their friendship to romance. Now not only their lives—but their hearts—are at stake. To survive, the two must unite all their knowledge, skills, and gifts to uncover a secret bigger than either could have imagined. A secret as big as the entire universe...

I discovered Academy 7 on the shelf at the library when I was looking for something else. I had never seen or heard of it before, and I was not aware of the author, so I was doubly delighted when I read and really enjoyed it. The 2 main protagonists, Aerin and Dane are from 2 wildly different backgrounds and are both emotionally scarred for wildly different reasons - a match made in heaven? You'd think so wouldn't you, and eventually, yes, things do turn out well, but they have a long harrowing road to get there.

Set at some unknown point in the future, when space travel is taken for granted and there are many inhabited worlds, Aerin and Dane end up together at the most prestigious school in the universe. Not the 'World', but the universe! Other than that, it could be any boarding school in America. What I found interesting was the lack of secondary characters in the school. This story really was centred just around the 2 students, and other than an annoying queen bee who pops up every now and again, most of the other characters are adults, good and bad.

I enjoyed the growth of the characters, who despite their differences, had a lot in common, and the journey to acceptance of each other was fun to read. There were a couple of rather disturbing interludes with Dane and his father, and Aerin's parents, but they added dimension to the story. The romance was gentle, the mystery exciting and the characters were real. If you haven't already come across this one, try it out, I think you'll enjoy it.

It turns out that Anne Osterlund has also written 'Aurelia' and 'Exile', so I'm off to see if I can find a copy of either, or both!
Posted by curlypow at Sunday, February 13, 2011