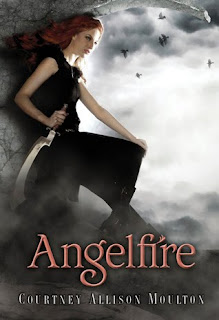 
This debut, the first novel in a trilogy, is achingly romantic, terrifying, and filled with blistering action.

When seventeen-year-old Ellie starts seeing reapers - monstrous creatures who devour humans and send their souls to Hell - she finds herself on the front lines of a supernatural war between archangels and the Fallen and faced with the possible destruction of her soul.

A mysterious boy named Will reveals she is the reincarnation of an ancient warrior, the only one capable of wielding swords of angelfire to fight the reapers, and he is an immortal sworn to protect her in battle. Now that Ellie's powers have been awakened, a powerful reaper called Bastian has come forward to challenge her. He has employed a fierce assassin to eliminate her - an assassin who has already killed her once.

While balancing her dwindling social life and reaper-hunting duties, she and Will discover Bastian is searching for a dormant creature believed to be a true soul reaper. Bastian plans to use this weapon to ignite the End of Days and to destroy Ellie's soul, ending her rebirth cycle forever. Now, she must face an army of Bastian's most frightening reapers, prevent the soul reaper from consuming her soul, and uncover the secrets of her past lives - including truths that may be too frightening to remember.


On the whole, I thoroughly enjoyed Angelfire. For the most part Ellie and Will's relationship was believable and developed nicely, although at one point I found myself thinking of them as being a bit like Buffy and Angel - him not telling her things for her own good when he should have come clean. I could explain more, but I would be giving away major spoilers, so you'll just have to see what you think when you read it. The romance between Ellie and Will is sweet and inevitable, but nicely handled. I just wish I could have met a nice guy like him when I was young.

The bad guys - reapers - were many and varied and some were particularly nasty. Ellie is able to defend herself against these nasties by summoning her swords, which are covered in angelfire - hence the title of the book. There was one thing that puzzled me though. If Ellie could summon the swords out of thin air when she needed them to fight, why did she have to look for and find them physically when she dropped them in the middle of a fight - which seemed to happen with surprising regularity? Not a big deal, but it puzzled me. The action flowed at a swift rate though and kept my interest so I'm looking forward to seeing where Ms Moulton goes with the trilogy.

Ellie's parents have a strong presence in the story, although not all of it is positive. Without giving away too much of the story, I will be really interested to see if her fathers' behaviour is relevant in the next two books. Ellie's mum is supportive and understanding to a point, but still punishes her for her sins. Personally I thought she got off lightly, but it was refreshing to see parents in a strong role.

All in all, a strong start to the trilogy and I look forward to seeing where the next volume takes us.On a side note, I just love Ellie's name, but I think I'm a little biased - it's the same as my daughter's.
Posted by curlypow at Sunday, February 13, 2011